The ACIA Awards have been running since 2008 with the objective to recognise and reward excellence in the field of crime and intelligence analysis in the UK, Ireland and the Channel Islands. Some of the core aims of ACIA - to facilitate the transfer of knowledge, to develop analytical skills, and to constructively challenge and support our peers, are encapsulated perfectly by the ACIA Awards Programme.

The ACIA takes the judging of its awards process very seriously as this is pivotal to the awards being viewed as credible and professional. The awards are judged by an independent panel of experts that are highly respected in their field.

Judges are asked to select a winner based on criteria of their own devising. The process does not use a points scoring system.

The ACIA Awards Programme has always had a very high calibre of a panel of esteemed judges that help to make the awards judging credible and independent.

Nominations are strongly encouraged for analytical work impacting at all levels - this is not just about showcasing high profile work but encouraging outstanding achievements and innovative development in all areas, and at all levels, of analysis. We suggest that nominations with the following characteristics may impress the judges:

- An innovative approach to crime intelligence analysis - This may be through the use of new tools or techniques, the improvement and innovative implementation of analytical techniques, innovation in the use of visualisation or other communication methods etc.

- Clear evidence of benefit - What impact has this work had?  What is the benefit to the public?  Is there a clear operational benefit and/or other benefit to the organisation?

Nominations can be for analytical work which impacts at a local, regional or national level.

There is a single award category and nominations are strongly encouraged for analytical work impacting at all levels - this is not just about showcasing high profile work but encouraging outstanding achievements and innovative development in all areas, and at all levels, of analysis.

Rather than a points scoring system Judges are asked to select a winner based on criteria of their own devising. We suggest that nominations with the following characteristics may impress the judges:

This may be through the use of new tools or techniques, the improvement and innovative implementation of analytical techniques, innovation in the use of visualisation or other communication methods etc.

An award is an opportunity to have your work recognised by your peers and to share best practice with the intelligence analysis community. As well as the prestige of winning the Award, there is also a prize. Prizes in previous years have included £1,000 of Apple vouchers, advanced analysis courses, a stay in a luxury hotel and attendance at a red carpet movie premiere event. Winners also receive an ACIA certificate and trophy, and if a suitable category exists, automatic entry to the International Association of Law Enforcement Intelligence Analysts (IALEIA) Awards.

Some of the previous winners

“I was absolutely astonished to win the ACIA’s National Award in 2014. I was nominated for the Problem Profile I had developing in relation to child sexual exploitation in Rochdale. This was a piece of work that I became totally engrossed in and I never thought that something I had done would suddenly get this kind of recognition. One of the “prizes” for winning the award was to present your work at the International Crime and Intelligence Analysis conference in Manchester in February 2015. Presenting on this scale was something new to me and well outside my comfort zone. But it could not have gone better. That conference was an amazing experience and I made contacts with many other analysts working on CSE in other force areas. This has been really beneficial and helped me expand my knowledge base and look for examples of best practice in other forces.

I didn’t think anything was going to top that conference. But then the ACIA announced the I had also won the International award that would be presented in Phoenix, Arizona in May 2015. I cannot describe how amazing Phoenix was. It was simply analyst heaven!!!

There is an opening ceremony similar to the Olympic games where I was asked to carry the British flag and then there were four days of amazing seminars. The speakers included analysts from the CIA, NCIS and FBI as well as police departments and sheriff’s offices. It was great to discover some of the similarities that UK intelligence analysts experience with those in the US and also an eye opener to see some of the differences. There were also several training courses available if you attended certain seminars which were really very valuable so I have come away from the conference with two new training certificates to add to my CV. The seminars covered a wide range of subjects from very operational analysis of a prostitution ring to strategic analysis courses.

There was also an exhibition area with stands from IBM, Lexis Nexis, Geofeedia, Wynyard, Track Group, America Military University, the list goes on. So I came back with hundreds of free pens, notebooks, mouse mats, neoprene bottle and can holders!

I was lucky enough to have two days after the conference before flying back home so I was able to explore Phoenix. It really was the trip of a lifetime (excluding my honeymoon) and I feel so lucky to have been part of that.

As a result of both these conferences I have been asked to present at others. I have also met so many amazing analysts and I now have contacts spanning the whole of the UK and beyond. Before I was nominated for the ACIA award I would not have believed that I would ever have done any of the things I have done in the last six months. Presenting to rooms full of hundreds of people including Chief Constables and attending international conferences are things that didn’t happen to analysts in small northern towns! But simply because of that nomination to the ACIA I’ve had the most amazing six months of my career. I hope the ACIA continue to run these awards so that all the analysts out there have something to strive for and the chance earn this recognition.” 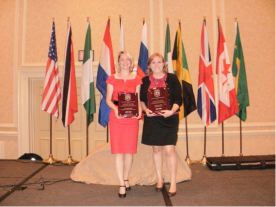 Having won prizes in the 2009 ACIA Award, Joy Caws and Aimee Reed were both automatically entered into the International Association of Crime and Intelligence Analysts (IALEIA) annual awards. Due to the very high standard of their nominations both were announced winners of the 2011 IALEIA Professional Service Award, given to individuals for "outstanding contributions as intelligence analysts to the achievement of law enforcement objectives". In addition to winning the award, Joy and Aimee were invited to the IALEIA Conference in Nashville, Tennessee, in May this year to receive their prize at the Awards Banquet. Joy Caws from Warwickshire Constabulary tells us more about the experience:

"It was a real highlight to my career, and I am so glad and thankful that I was given both the award and the opportunity to attend. The conference was excellent- more pomp (National Anthems, flags! etc) than our conferences, but of the highest standard, and I would rank it up there and totally comparable with the best conferences I have attended over here. There were talks on everything from Microsoft Excel specialist techniques, to Smuggling, to covert cell site work. One thing that was also apparent was the professionalism that Analysis is regarded over in the states. It is a well regarded, professional career choice, with people serving their whole careers in different ranks of analysis, and much less of a staff vs officer divide, which really struck me,"

Aimee Reed from the Metropolitan Police Service also spoke very highly of the conference, the awards and their value to analysts: "Traveling to the USA to pick up the award was fantastic. The Conference was extremely well organised and offered a wide range of high calibre speakers on all areas of serious and organised crime. It was very practitioner-focused and this was largely because the content of the courses and seminars aimed to use analysis to direct law enforcement activity - not just a high-brow overview of academic theory. It was obvious that intelligence professionals are held in much higher regard in other jurisdictions than the reported perception of intelligence staff within UK law enforcement. The long-establishment of IALEIA appears to have been influential in this and I hope that ACIA can achieve the same. I was really interested in the link between training of analysts and the conference. Basically, all new analysts are expected to attend the Conference to become accredited and trained in specific techniques. On a personal note, winning was a real surprise, as you are judged all over again by international peers but it was great to meet analysts from all over the World - especially Joy and her family! A great experience"

This is the third year running that winners of ACIA awards have gone on to win awards from IALEIA. ACIA has a long standing relationship with IALEIA due to its common goals, and it is great that we are able to get analysts from the UK recognised both nationally and internationally.

This website has been made possible through the support of QWARIE and RISC who have contributed to the community and asked for nothing in return.